In his press conference last night, President Barack Obama raised a few eyebrows when he said now is not the time to close our borders with Mexico, comparing it to “locking the barn door after the horse is out.”  It was a poor metaphor to begin with. In this case, there are milions of “horses” still in Mexico that would love to leave and come here to get away from the Ground Zero of the Swine Flu… but if they are in the early stages, they could easily be bringing it with them during a time when they are most contagious.

What doesn’t President Obama understand about taking all available steps in a crisis like this? Yes, it’s too late to prevent the flu from entering the country; but it’s another thing altogether to keep out others who might carry it here and spread it even farther or faster.  Any type of missed opportunity to slow down or limit the spreading of this disease is unfathomable, and could quite possibly cost more lives.

In his first hundred days, Obama has spent more money than all previous Presidents combined (and that’s money that’s been adjusted for inflation).  As he begins his second hundred days, he has shown extremely poor judgement in regards to sealing the borders in an attempt to limit the spread of Swine Flu.  This could be a huge mistake in the number of lives needlessly put in jeopardy.

I was going to end by saying we may live to regret this.  But I already regret having a President with no guts and no vision as to the consequences of his actions vis–a-vis a pandemic scenario.

So I’ll end by simply saying, some among us may not live to regret this.  Bad decision, Mr. President.

The Most Expensive 100 Days In American History

Actually, the title could just as honestly be: The Most Expensive 100 Days In World History.

Last night, I read that the area I live  is now into double-digit unemployment.  Foreclosures are still on the rise. Companies that have done business here for generations are simply closing down. The commercial real estate market is also in decline.

I shook my head in despair for those who find themselves out of work and out of options. I also gave thanks that I am still gainfully employed. But then I remembered: “It’s Wednesday night! I’ve got to put this out of my head and get home…  American Idle is on!”  No that’s not a spelling error. I’m talking about watching the new hit TV show starring President Barack Obama called “American Idle.”

You know, that show where  Obama feigns modesty as he praises himself for his accomplishments of his first 100 days in office. Then he puts on his “aw shucks” expression as he claims how it’s just a beginning and how he has miles to go before he sleeps…” That show. And it’s called “American Idle” because a good chunk of the audience is out of work.

Sure enough, I got home just in time to see him walk down the hallway and up to the microphone. Ahhh… it was showtime! It will take some time to go through his prepared speech lie-by-lie, misrepresentation by misrepresentation, but while I try to get a grasp on the enormity of the sleight-of-hand used in this speech, here’s a responsible response from Arizona Senator, Jon Kyl who sums things up just fine:

Well put, Senator Kyl. If you only had the charisma President Obama has.

UPDATE: Fox is now reporting that a WH announcement is due noon, EST… Chapter 11 still pending. (I wish these reporters would get their stories straight.)

Fox News is reporting that Chrysler is filing chapter 11… And they just had on the WSJ reporter Stephen Moore who claims that he doesn’t think that the government will let the company completely fail and predicts another bailout of apx. $5 billion dollars.

Will update when possible.

“Scare Force One”: Photo Ops for Everyone!

Thanks to the NY Daily News, we can all have Air Force One do a virtual low fly-by in our own neighborhoods!

With some stock images, few minutes and a couple of clicks of a mouse, a White House staffer could’ve placed the jet in front of just about any New York landmark.

We should know. We did just that.

But we can’t be the only ones with a flair for Photoshopping. Think you can do better? Be our guest.

In full Tea Party mode, I’m going to suggest doing this for more than just fun; I recommend that, once you’ve created some photos, email them to the President with a message:

You’ve created a multi-generational multi-trillion dollar deficit. Let me help you save money by donating the attached photos of Air Force One in my neighborhood, so that you don’t have to spend more of our tax dollars on PR photo shoots.

All you have to do open a photo editing program (such as PhotoShop), grab a scenic photo, and use the handy “Scare Force One” image provided by the newspaper. Voila! Instant publicity shots for White House tchotchkes. It’s so easy, even I could do it.

You can create nature photos: 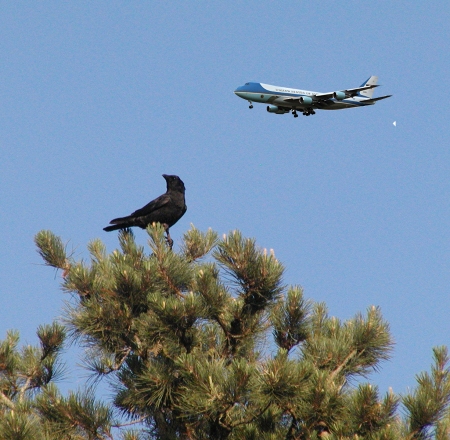 Vacation memories–yes, that’s Scare Force One way up in Alaska!

Create new “Scare Force One” photos of your own and send them to President Obama. Let him know you’re none too pleased with the “felony stupidity” and expense of the “Scare Force One” fly-over stunt that he pulled on Tuesday.

Why am I writing this? And why on earth are you reading this post? I mean really… Seriously… What are we doing here?

Clinton didn’t inhale. We read GHWB’s lips. We’re still looking for the definition of “is”. Obama didn’t bend over to bow to that Saudi King.  And Pelosi certainly didn’t know that rough stuff like water boarding was going to be afoot back in 2002.

Look, I’m just a dumb engineer. But there is so much “in your face” lying by our politicians, that I have to fall back on the only mechanism that I know to render reason – that of equations. Specifically, I’m going to model using the Drake Equation. (If you’re still reading this, you probably should get a life, but onward…)

Simply and roughly put, the Drake Equation calculates the likelihood of finding life in the Milky Way Galaxy. It is:

Now, let’s see if we can’t warp that puppy into giving some numerical indicator of actual truth flowing out of DC…

Obviously, there’s a little tongue in cheek in the equation above, but not nearly as much as you might think. I’ve seen equations like these used in the real world (and on subjective matters too). When properly applied, they can be freakishly consistent. Two examples:

I’d be interested to hear if anyone makes a modified model of the Drake equation and plugs in some actual numbers.

“The stars might lie but the numbers never do.”

Man, MSNBC never seems to learn! Having forgotten their last debacle in which they allowed the public to grade Obama, they’re at it again.

Go vote here. Give the President the grade he deserves.

See the trouble you can get into when you make rash promises you have no intention of keeping?

Grand Rants
Create a free website or blog at WordPress.com.