On April 26, DHS Secretary Janet Napolitano met the press to give an update on the Swine Flu outbreak. She clearly was reading from prepared notes (evidently TOTUS is reserved for PresBo only), and she still couldn’t manage to speak a complete sentence without a few “uh”s thrown in. In this, she is a worthy acolyte of a TOTUS-free Obama.

Skeptical? Take a look; by using Wordle, our favorite online tool, we can see that a picture is worth, well, in her case, 897 words:

In this, she outdoes her mentor. As you may recall, we parsed one of President Obama’s recent press conferences. In that instance, we took the answers he gave to his first three questions, ended up with a total of 910 words, 46 of which were “uh” or “um”, for a total of 5% null content.

In Sec. Napolitano’s briefing consisting of only 897 words, she managed to work in, by my count,  91 instances of “uh” or “um.”  In other words, fully 10% of her speech was given to meaningless interjections. But pictures only go so far. To feel the real pain, watch the video. (You may have to turn your volume up a bit.)

Now, I’m no public speaker. But didn’t Obama promise us a new era of politics with bright shiny smart people in high positions? People who should be able to speak for five minutes on a prepared subject without stumbling over every few words?

The one thing you can say about Napolitano: she makes Obama look good when he’s speaking extemporaneously.

In his press conference last night, President Barack Obama raised a few eyebrows when he said now is not the time to close our borders with Mexico, comparing it to “locking the barn door after the horse is out.”  It was a poor metaphor to begin with. In this case, there are milions of “horses” still in Mexico that would love to leave and come here to get away from the Ground Zero of the Swine Flu… but if they are in the early stages, they could easily be bringing it with them during a time when they are most contagious.

What doesn’t President Obama understand about taking all available steps in a crisis like this? Yes, it’s too late to prevent the flu from entering the country; but it’s another thing altogether to keep out others who might carry it here and spread it even farther or faster.  Any type of missed opportunity to slow down or limit the spreading of this disease is unfathomable, and could quite possibly cost more lives.

In his first hundred days, Obama has spent more money than all previous Presidents combined (and that’s money that’s been adjusted for inflation).  As he begins his second hundred days, he has shown extremely poor judgement in regards to sealing the borders in an attempt to limit the spread of Swine Flu.  This could be a huge mistake in the number of lives needlessly put in jeopardy.

I was going to end by saying we may live to regret this.  But I already regret having a President with no guts and no vision as to the consequences of his actions vis–a-vis a pandemic scenario.

So I’ll end by simply saying, some among us may not live to regret this.  Bad decision, Mr. President.

State of Emergency Declared As Swine Flu Spreads In US

John Brennan, assistant to the president for Homeland Security, announced, “At this point, a top priority is to ensure that communication is robust and that medical surveillance efforts are fully activated.”

A press release from Reuters provided the following additional information:

[Brennan] said beefed up monitoring would enable rapid identification and notification of any new cases that might occur in the United States and Mexico.

Besser said the CDC has confirmed one case of swine flu in Ohio, two in Kansas and eight in New York. There were already seven confirmed cases in California and two in Texas. Officials emphasized that the U.S. cases are not as severe as the cases that have been identified in Mexico.

Nevertheless, the officials recommended planning for potential U.S. school closures and Homeland Security Secretary Janet Napolitano said the United States would release some of its stockpiles of anti-flu drugs Tamiflu and Relenza. She also said the United States would declare a public health emergency to start the flow of aid to states and communities that might be affected by the outbreak.

While we at Grand Rants will continue to post appropriate additional information as it becomes available, I think it should be stated clearly at this time that while we look to federal, state and local government for information, it is incumbant upon each of us to step up and take the necessary pro-active measures at the individual level to minimize both our own susceptibility to the virus as well as its spread.

The biggest problem in the prevention of spreading any communicable illness comes from individuals who fail to act in a responsible manner either through poor hygiene practices or simply being uninformed. The CDC has made available for downloading and printing, guidelines for the steps we should all take to help prevent the spread of this and any other flu-virus. You can download these posters here.

UPDATE: British flight attendant has been quarantined in London after falling ill on a BA flight from Mexico City to Heathrow.

According to The World Health Organization (WHO) and the Centers for Disease Control (CDC), we are in the early stages of a quickly spreading breakout of an odd variation of the Swine Flu, one that apparently is not responsive to existing vaccines. Reportedly originating in Mexico, its toll there is 81 people dead and over 1,300 sick. There have been eight confirmed cases in the US thus far. All eight cases in the US have recovered, however. 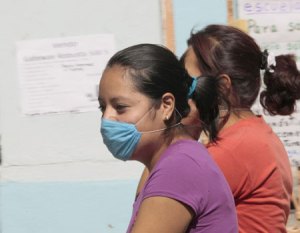 Just how serious this health threat is, is still being evaluated. At this point, there are conflicting opinions. The outbreak is one that a WHO official is describing as having “Pandemic Potential.” Note the emphasis on the word “potential.”

“We are very, very concerned. We have what appears to be a novel virus and it has spread from human to human. If international spread is confirmed, that meets WHO’s criteria for raising the pandemic alert level.”

Yet a Reuters story points out that all eight confirmed cases in the the US have recovered, with CDC’s Dr. Anne Schuchat adding:

“We don’t think this is time for major concern around the country.”

With these two organizations unable to agree on the degree of concern, I would suggest as a precaution, this might be a good time to educate ourselves as much as possible in the event this outbreak does ultimately warrant the concern.

Let’s begin by answering the question, “What IS the Swine Flu?”  The CDC has excellent  information on this. Start here.

Next, let’s take a look at the known FACTS in this matter as of this date:

For now, I would highly suggest keeping an eye on your local and national news as well as news blogs. We will update as news develops on this story. At the moment we seem to be talking about its potential rather than the actual damage it could do, but this is probably a good time for us to gather as much knowledge as possible to prevent the spreading — or catching — of this disease, should it penetrate our geographic region.

What Can I Do To Protect Myself & Family?

Now is the time to EDUCATE YOURSELF on this disease. Start here:

Some basic hygiene ideas (these should done naturally, but so many people today lack both common sense and courtesy):

Make hot links to your most reliable sources of information on this topic. Here’s a few to get you started:

While I’m concerned whenever a story like this surfaces, I think it’s important to keep ALL aspects of  things in perspective.  There’s another crucial point to make here.  As Michelle Malkin points out, maybe now both political parties may revisit the concept of  actually protecting our borders instead of leaving them wide open for the potentially sick to pass through completely unchecked, subjecting more of our own citizens to the disease.

Oh, and I’ll bet it must feel just wonderful being in a “Sanctuary City” right about now, eh?