Obama At the U.N.

I know. I don’t care. I’m going to post it anyway. 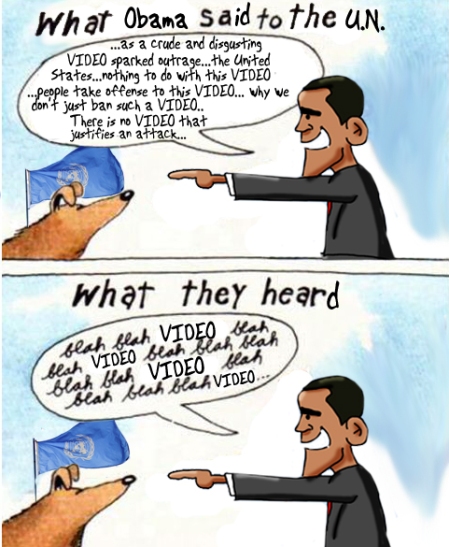 With apologies to the great Gary Larsen.

By now you have probably seen the photo of the midnight raid in which the maker of the film which is allegedly causing the “ruckus” in the Middle East was “politely” “requested” to “go downtown and answer a few questions”. The photo itself begs to be captioned, and this being the 21st century, voila, instant Quick Meme, entitled, “Defend the Constitution.”

All the captions pointedly call out the blatant disregard of the officials of our First Amendment rights (as far as I know, we don’t have any anti-blashpemy laws on the books… yet). But of all the images listed at the link, I think I found this one the most disturbing:

As you recall, the very next day after the Ambassador was murdered, President Obama jetted off to Las Vegas for a fundraiser. And these days, our leaders are spinning like crazy by insisting, in the face of mounting evidence to the contrary, that the Cairo and Libya uprisings were simply spontaneous outpourings of indignation against a ridiculously crappy 15-minute video trailer, which had been online and available for protesting for at least a month prior.

Unrest in the Middle East, murdered Americans, attempts to trample our basic rights. This isn’t over yet.

Then and Now: Fingers vs. Fingerprints

This is what the election is about.

I Get No Kick from Campaigns

Given the situation in the Middle East–four murdered American citizens, U.S. embassies and consulates attacked, embassy staffers desperately issuing an apologia for American values–one might think that Obama might settle down and do some actual Presidentin’, to calm the storm and slow the rising waters, so to speak.

But one would be wrong, of course. Charlie Sperling of the Washington Examiner highlighted an interesting quote from an interview Obama did Wednesday night with CBS. His statement make it clear that he is now trying to rewrite his administration’s initial reaction to the Arab “Sprung”.

“[The Embassy statement] didn’t come from me. It didn’t come from Secretary Clinton,” Obama said. “It came from folks on the ground who are potentially in danger. And my tendency is to cut those folks a little bit of slack when they’re in that circumstance rather than try to question their judgment from the comfort of a campaign office.” [Emphasis mine]

“From the comfort of a campaign office.” No, Mr. President, that would be Mitt Romney in a campign office.

You are the actual president and when disaster strikes, eyes turn to you in your current job (which you are trying so desperately to keep), regardless of whether you’d rather be on the links or schmoozing with a few rich limousine liberals and eating Waygu beef hors d’oeuvres instead of doing the actual hard work of taking proper care of the country.

Perhaps you wouldn’t have to try so hard if you’d actually man up and do the damn job, rather than being on a perpetual campaign.

You may get a kick from campaigns, but we don’t get a kick out of you… we’re just going to kick you out.

Why Is This Not an Act of War?

The U.S. Ambassador to Libya was murdered in the “turmoil” in Benghazi yesterday, along with another Consulate staffer and two Marines. The New York Times didn’t even bother to report this on its front page this morning, while the White House issued a statement from the President which read in part:

“I strongly condemn the outrageous attack on our diplomatic facility in Benghazi, which took the lives of four Americans, including Ambassador Chris Stevens…”

If the Libyans aren’t careful, Obama might get outraged enough to send them a sternly-worded letter. I’m sure Ambassador Christopher Stevens, Infomation Officer Sean Smith, and the two heroic Marines who were slain will take comfort in that, as will their families.

Our Consulate attacked, our Ambassador murdered. Our embassy in Egypt attacked. I cannot fathom why these deeds are not considered acts of war against us. At the very least, President Strongly Condemn ought to immediately cut off all aid to both countries.

The real outrage is that apparently the Obama administration had information on the possiblity of attacks as early as June of this year, and did… nothing. No beefed up security, no strong statements warning against attacks. Nothing. The president was too busy desperately trying to keep his job to actually do his job.

If only Obama had some passion, some fire, some sympathy for those murdered yesterday. He might sound something like this:

Nah. That would interrupt his campaign trip to Las Vegas.

Where Are The Adults at the DNC?

Wow, whose idea was it to produce and play that lovely little video which states so clearly:

“We are committed to all people. We do believe you can use government in a good way. Government is the only thing that we all belong to.”

As many so promptly and clearly responded (including Mitt), we don’t belong to the government, the government belongs to us. How on earth did yet another unforced error make it onto the national stage, and at such an important time for the Dems? This gift gaffe is on a par with “You didn’t build that,” and you can count on Romney, Ryan, and the RNC to make hay with it.

Was that gaffe by the hand of Debbie Wasserman Schultz, the putative head of the DNC? No, apparently she was having problems of her own last night by being caught out in a blatant (and ridiculously provable) lie of her own.

“By way of background, on Monday, the Obama campaign’s Jewish outreach arm held a training session at the Democratic National Convention instructing Jewish Democrats on how to convince fellow Jews to vote for Obama by breaking through what she [Wasserman Schultz] characterized as Republican distortions of President Obama’s record on Israel.

As she was wrapping up her remarks, she claimed that, “We know, and I’ve heard no less than Ambassador Michael Oren say this, that what the Republicans are doing is dangerous for Israel.”

When asked on air about this statement she promptly denied she ever said it. Claimed she was misquoted. Sadly for her, of course, the audio is available and online and anyone with an inquiring mind can trot right over to the Washington Examiner and hear her state the exact words that she lied about. It’ll be interesting to see how she backtracks her way out of that.

And last, but certainly not least, who thought it would be a good idea to dig up Teddy Kennedy? Someone in the party that claims Republicans are waging a “war on women” thought it would be great to resurrect the man who drunkenly drove off a bridge and left a young woman to die a horrible death trapped in a car underwater and have him speak for the party. Yes sir, there’s a role model for you!

At that, he looked a bit better than Jimmy Carter…

I just can’t wait to see what happens on tonight’s episode of , er, the Democratic National Convention.

Yes, it’s today! We’re definitely paying tribute to the “Absentee-in-Chief” with powerful symbols. While we may be the only ones in our little Cape Cod neighborhood to represent, every little word and deed helps!