Birth Certificate Released… What Else Will Drop Today? 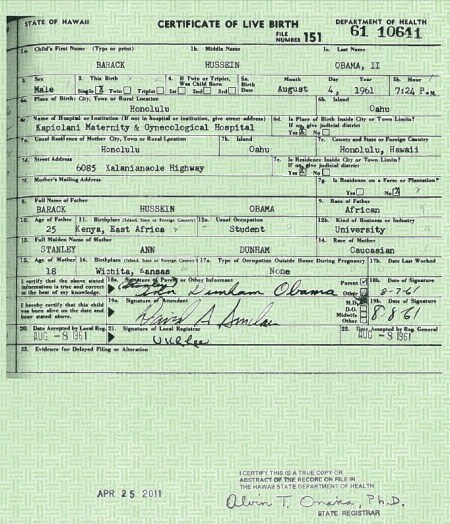 The New And Improved Birth Certificate

Birthers everywhere will be celebrating… then wondering what to do with the rest of their lives.  Donald Trump is already strutting like a peacock, claiming credit for its release.

With all the fanfare of a British Wedding, the media announced the release of what is purported to be the actual long-form Birth Certificate of Barack Obama.

So what’s wrong with this picture? As Glenn Beck would say, “Watch the OTHER Hand.” Beck is convinced Obama will once again use one significant event to draw attention away from something of even more significance. Perhaps. We will have to wait and see.

Beck could be right: Ben Benanke is scheduled to give the first press conference EVER by the Fed later today. What could possibly go wrong there?  Well, the bonds market is closing early today… just prior to Benanke’s speech. Does that make you feel all warm and fuzzy?

Either way, the Birth Certificate issue SHOULD BE PUT TO REST ONCE AND FOR ALL.

This just in from the Republican Party:

In order to be taken seriously as a Presidential candidate for the Republican Party, you have to be someone who can address serious issues while being able to avoid attempts by the left to discredit you. In this case, you were played by Barack Obama like a cheap harmonica.

I’ve long believed in the value of speaking more than one language. Years ago, when I learned I was going to be sent on a business trip to the (then) Soviet Union, I studied the language for 4 months prior to my departure. It only half paid off, however, as I quickly discovered that, while I was able to speak to them with my well-rehearsed phrases, I had no idea how to translate their replies to me.

This led to some experiences best forgotten. And if  Pavlik is reading this, I swear I thought I was saying your wife had a big heart (not to worry, comrade, my eye socket healed just fine).

So it was with great wonder that I discovered Sunday night how easily I was  able to translate Obamish (the language of President Barack Obama) to English as I watched him on 60 minutes.

During the interview with Steve Kroft, Obama said the health care system itself is huge and complicated and that changing it eluded previous presidents because it was so difficult.

Take a look at the the diagram below…

No great surprise right? But here’s the hitch… Americans are sick and tired of these two parties. Consider that we’re roughly one third Democrat, one third Republican, and one third Independent, and that the current shift away from the two major parties and into sanity independence is trending strongly upward, according to Pew Research:

Quite simply, people are disgusted with the two-party, good-old-boy, nudge-nudge-wink-wink political machine. Our values are no longer reflected by our elected officials; and their greedy selfish hubris is killing us.

Mark these words… The elections of 2010 and 2012 will witness a sea change in this country. We’re sick and tired of czars and bills that no one reads. (Oh by the way, now there’s talk of a “Health Insurance Czar” that would mold our health care system just in case the ruminations rattling around DC don’t actualize.)

No… There is a storm brewing, and it’s reflected in those charts above.

R U a Republican?

I love The American Thinker. They not only have terrific stable of amazingly thoughtful writers who do a great job with current topics, but their authors also have a deft hand with humor. Case in point is today’s article by Randall Hoven, “You Might Not Be A Republican,” all of which you will want to read. Herewith, just a few of the gems:

If you think the man who called his own grandmother a “typical white person” has transcended race, you might not be a Republican.

If you think a Democrat who made a $34,000 mistake on his taxes is the best man for the job of running the IRS and Treasury, you might not be a Republican.

If you think Rush Limbaugh preaches hate and Jeremiah Wright doesn’t, or that Wanda Sykes is funny but Ann Coulter isn’t, you might not be a Republican.

It’s a fun piece to read, and it was probably fun to write. If you have additional thoughs on who might not be a Republican, leave them here in the comments or go on over to The American Thinker and leave them there. Or both.

Yesterday, it was learned that Barack Obama has been repeatedly uh, “borrowing” the words of a political cartoonist for one of his favorite attacks on Republican rival John McCain. You’ll note the use of quote marks around the word plagiarizing in the headline above. This is, of course, because Obama has (surprise!) denied any knowledge of the origin of the lengthy quote which he repeated nearly verbatim from a political cartoon that had run in the Washington Post.

The details of how this came about can be gleaned from this article from the Fox web site.

This clearly illustrates just how disorganized and chaotic the Obama campaign has become.  He’s been reduced to plagiarizing political cartoonists. Where Obama once offered flowing speeches of inspiration, lately he’s got little more to offer than stand-up material one would expect from the likes of Leno or Letterman.

More seriously, however, this latest gaffe of failing to attribute the source of his material is indicative of a much larger problem for Obama and his campaign. This latest blunder illustrates precisely the LACK of fundamental organizational skills by the man who would be king. Worse, it again exposes his lack of character as he once again falls back on blaming someone else for his foible, claiming someone gave him the lines, failing to tell him the source.

As Commander In Chief, it’s your JOB to know what’s going on in your organization. Obama either doesn’t have a clue what’s going on within his campaign (exposing a lack of organizational skills), or is being totally dishonest in his explanations to the American Public (exposing his lack of character and trustworthiness). In either case, this is not “Change We Can Live With.” It’s merely proof positive that Obama  is clearly not executive material, let alone fit to serve as President of the United States. He has illustrated numerous times throughout the campaign that he has neither the character nor the judgment required for the job.

Throughout the campaign, I’ve winced as I’ve seen the public react as if Obama was the “second coming.” Obama gave wonderful speeches, but it quickly became crystal clear to me that, in Obama’s own words, these were “Just words… Just speeches” and there was little or no substance beyond those speeches written for him by others. Yes the speeches were flowing and radiant… but totally devoid of any specific substance and commitment, much like Obama himself.

Now, however,  according to the latest polls showing Obama’s has lost the one-time robust lead he had over McCain.  People are abandoning the Obama juggernaut as it slows to a halt in the choppy waters of the campaign.  What is the overwhelming suspect in this decline in support? It can really be linked directly to repeated demonstrations of his unique ability to make the wrong decisions constantly.

As for his stealing lines from cartoonists, Obama had better get his and his campaign’s acts together soon or else he will stumble across the November 4th finish line quoting one other cartoon as he tells us, ‘Th-th-th-th- that’s ALL, Folks!”

As I write this, Hurricane Gustav is steamrolling across the Gulf of Mexico towards the Louisiana coast. New Orleans has been evacuated as has most of coastal Louisiana and Southeastern Texas. National Guard Troops are converging on the area or mobilizing to do so immediately. Emergency supplies are finding their way to staging areas outside the projected strike zone. Evacuees are being welcomed into communities in surrounding states as well as here in Florida. President Bush is in Louisiana staying in touch with both federal assistance personnel as well as the National Guard. Senator John McCain has announced the Republican Convention will only do mandatory behind-the-scenes work but will cancel all other Convention activities as (in his words), “It’s time to take off our Republican hats” and put on “American hats.” McCain stated the necessity to focus on shifting their organizing and fund-raising power from party politics to the needs of the evacuees and, ultimately, victims of the hurricane. Oh, and filmmaker Michael Moore is making jokes about the storm, scheduled to make landfall at the same time the Republican Convention is to open in Minnesota.

Moore, an expert on using the liberal media like a disposable diaper to promote himself and his films, appeared on Friday’s Countdown with Keith Olberman on MSNBC (which apparently stands for “Moore Spews Nothing But Crap”). Moore smirked and guffawed as he proudly announced, “Gustav is proof that there is a God in Heaven” and went on to drool about the convenient timing of the hurricane vis-a-vis the Republican Convention. Er, Mike? I don’t think the folks in the path of this Category 3 hurricane share your view. In fact, no decent living person, regardless of his or her political bent would find that comment funny. It does, however, prove that Michael Moore simply doesn’t get it and sees opportunity for furthering his political agenda in the potential tragedy of others.

As I have documented in previous posts, I am registered neither as a Republican or Democrat. I am registered as an Independent. I say that only to establish the fact that the above and following comments are not the thoughts of an angry Republican striking out at Mr. Moore. They are the thoughts of a hard-working average man outraged at the absolute absence of any sense of humanity (or class, or dignity) by Michael Moore who, once again, has proven himself to be the black-sheep of the Pillsbury Doughboy’s family.

Democratic nominee Barack Obama was briefed by Homeland Security Director Michael Chertoff. He stated he would make available his vast e-mail contact database to solicit contributions from the public to support recovery efforts. He finished by adding, he might visit storm-damaged areas once things “settle down.” My guess is this would all hinge on whether or not he’s able to locate a portable teleprompter and allowed to take a camera crew in to tape him being Presidential in time of a national emergency.
Maybe Michael Moore will be available.